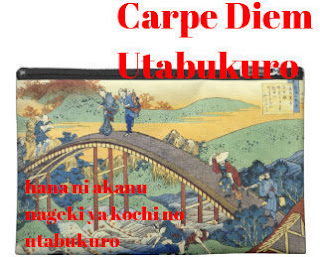 Last week I hadn't time enough to publish a new episode of Utabukuro, but now ... well I ran into a beautiful haiku by Jack Kerouac and I just had to create an Utabukuro episode about this haiku.


Jack Kerouac (1922-1969) was an American writer and pioneer of the Beat Generation. He epitomized the era of sex, drugs, alcohol, and jazz through his novel "On the Road," which became the bible of the countercultural generation.
Back in May 2014 Jack Kerouac was our featured haiku poet and I have written more posts about his beautiful haiku. So I am sorry if you think "again Jack Kerouac?"


A balloon caught
in the tree – dusk
In Central Park zoo

In this haiku the scene is just beautiful. The Zoo has closed and in the twilight the shade of a balloon caught in a tree looks like a monster or a ghost. A strong scene I think and the beauty of haiku makes this possible.


Autumn eve –
my mother playing old
love songs on the piano
© Jack Kerouac
This second haiku brought all wonderful memories back to me, not to my mother, I am happy she is still alive, but to my grandmother. My grandmother was Always busy with music, not playing the piano but she loved to sing. She sang beautiful and my kids liked her songs. So this haiku by Jack Kerouac is very special to me.

This Utabukuro episode is open for your submissions tonight at 7.00 PM (CET) and will remain open until July 21th at noon (CET). The goal ... share a favorite haiku and create an all new one inspired on your favorite. Have fun!