This month runs towards its end and we have only three (3) days left in this month. In this month we explored the mysterious nature through the trees of the Celtic Ogham alphabet. I referred several times to the Ogham, but I never really told you something about it. So ... today I love to tell you a little bit about the Ogham alphabet.

In the above gif you can see all the letters of the Ogham alphabet as used by the Celtic people and especially their druids. The Ogham was not a script for the people, but for the druids and their direct assistants.
With the Ogham alphabet the druids carved secret messages on sticks of Yew, as we could read earlier. It was important that those messages wwere only seen and read by those it concerned. The Ogham by the way wasn't written somewhere, but the druids used the flat of the hand to memorize the Ogham as you can see in the following image. 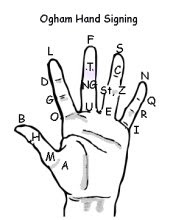 Ogham is sometimes called the "Celtic Tree Alphabet", based on a High Medieval Bríatharogam tradition ascribing names of trees to the individual letters. The earliest example of Ogham comes from the 4th cent AD, although it is generally accepted that the Ogham alphabet script was modeled  on an already existing script. (Source: Wikipedia)

Each stroke of the Ogham corresponds to a letter of the alphabet, which is in turn associated with a tree. It is most commonly read from bottom to top. Although we know the letters that each stroke represents, and can translate the ancient Ogham inscriptions accordingly, we cannot be so confident when we come to associate the trees with particular months. There has been much controversy as to whether the Ogham really was used as a calendar by the Druids, linking each tree and letter of the alphabet to a moon month. (Source)

Well ... I hope you enjoyed this episode and that I have inspired you.

This episode is NOW OPEN for your submissions and will remain open until August 2nd at noon (CET). I will (try to) publiush our next episode, druids, later on. Have fun!