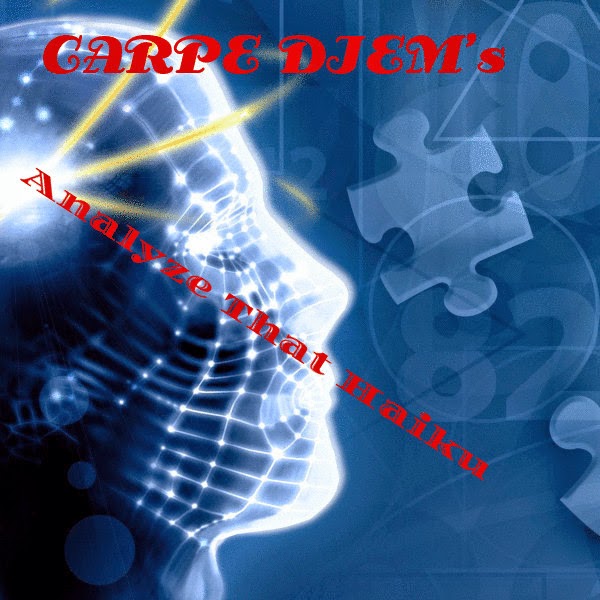 I have thought this new feature over and over again, but I finally decided to try it ... for a month. This new feature will appear two times this month and I am looking forward to your responses on it.
As you will understand from the title of this feature ... it's about analyzing haiku.

The goal of this new feature is to tell the story you read from a haiku given. It's said that haiku isn't easy to compose, but it's even more difficult to read haiku. If you would ask your readers to tell you what they think you experienced while writing the haiku ... they will tell you (almost certain) another story than you had in mind while you wrote, composed your haiku.
﻿﻿
Let me give you an example of one of my haiku and the thoughts I had as I wrote it and what one of my readers said.

Here is the haiku:

lonely flower
my companion
for one night

I will tell you: It was in 2005 that I had a very bad episode in my life. I had a burn-out and had suicidal thoughts. I felt alone, more alone than I ever had thought I was ... at work things went wrong, we had a few marriage problems and a son who was starting puberty ... all together made me feel that I would scream "Stop the World I want to Get Off" ... There was only a little book of poems that gave me some comfort and safety ... and so this haiku saw the birth light in a very bad time in my life.

One of readers told me once that he/she thought that this haiku was about a One-Night-Stand ... and ofcourse that too can be the experience described in this haiku ... well it wasn't as you could read above.

This haiku by the way ... was my first English one ever and I published it on Wonder Haiku Worlds and it became a success and was translated in several languages ... so this haiku, which describes one of the most evil periodes of my life, became my international breakthrough ... and that shows how a negative experience can become a positive one.

I hope you understand what the goal is for this new feature ... in short ... analyze the haiku means try to tell the story behind the haiku ... let the given haiku come to life ... see it in front of your eyes ... feel it with all your senses ... be part of the haiku ... maybe it helps to read the haiku aloud more than twice ... try to come in touch with the haiku. Share your thoughts, your analysis with us all ... and try to write/compose a new haiku with the story you analyzed from the haiku.

Here is the haiku which I have chosen for this first Carpe Diem "Analyze That Haiku", it's a haiku composed by myself which I once wrote for Haiku Heights. Here it is:

in the old barn
behind the hay bales
a secret meeting

What do you think was the story behind this haiku? Try to analyze it, try to become in touch with the haiku, to come in touch with "my spirit" and share your analysis and new haiku inspired on your analysis with us all here at our Haiku Kai.
I looking forward to your responses and ideas about this new feature. This zero-episode is NOW OPEN for your submissions and will remain open until June 18th at noon. For now ... have fun, be the analyst and be inspired to share your thoughts with us all here at our haiku-family.