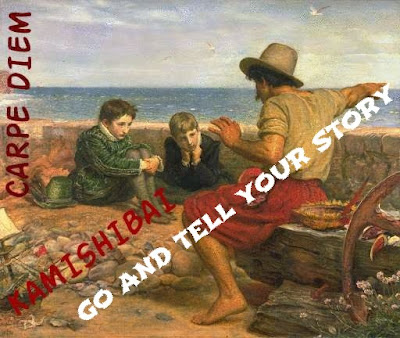 Today we will make a trip to Broadway. I think you all are familiar with Broadway, the place to be if you like musicals and more.

Broadway theatre, commonly known as Broadway, refers to the theatrical performances presented in the 41 professional theatres with 500 or more seats located in the Theater District and Lincoln Center along Broadway, in Midtown Manhattan, New York City. Along with London's West End theatre, Broadway theatre is widely considered to represent the highest level of commercial theatre in the English-speaking world.

I haven't been there, but I hope it will once be one of my visits at the USA. I am not a big fan of musicals, but Broadway sounds like a legend. So I think Broadway can inspire you to create an "extreme haibun", with a maximum of 55 words including the haiku (or tanka).

To inspire you I have a nice piece of music for you taken from the musical "West Side Story" (1957):

Well ... it is up to you now ... create an "extreme haibun" inspired on Broadway. Have fun!

This episode is NOW OPEN for your submissions and will remain open until April 18th at noon (CEST). I will try to publish our nex episode, Rainbow, later on.