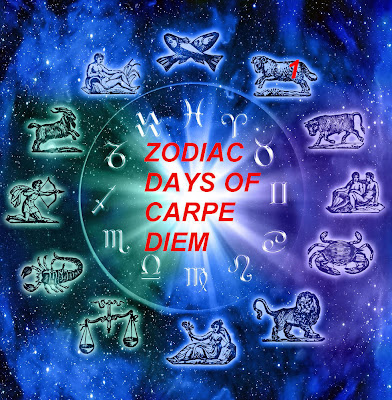 As you can see I have made a special logo for the Zodiac days of Carpe Diem and in every logo I will give the number of the Zodiac-signs. Today we have our first Zodiac Day, Aries.

In both astrology and historical astronomy, the zodiac (Greek: ζῳδιακός, zōidiakos) is a circle of twelve 30° divisions of celestial longitude that are centered upon the ecliptic: the apparent path of the Sun across the celestial sphere over the course of the year. The paths of the Moon and visible planets also remain close to the ecliptic, within the belt of the zodiac, which extends 8-9° north or south of the ecliptic, as measured in celestial latitude. Historically, these twelve divisions are called signs. Essentially, the zodiac is a celestial coordinate system, or more specifically an ecliptic coordinate system, which takes the ecliptic as the origin of latitude, and the position of the sun at vernal equinox as the origin of longitude.

For starters ... as you could have read in our first episode of April's Carpe Diem, I am an Aries (The Ram), but as I ask an Astrologer to make my birthday-chart, than I am a Taurus, because I was born around 8.30 PM (CET). Sometimes I read the horoscope and to see what the future will bring me I read both signs (Aries and Taurus). Well ... I am not such a believer of Astrology, but sometimes Astrologers say things in which I can find myself back. Let's look at the qualities of the Aries.


According to the Tropical system of astrology, the Sun enters the sign of Aries when it reaches the northern vernal equinox, which occurs around March 21. Due to the fact that the Earth takes approximately 365.25 days to go around the Sun, the precise time of the equinox is not the same each year, and generally will occur about 6 hours later each year, with a jump of a day (backwards) on leap years. Since 1900 the vernal equinox date ranged from March 20 at 08h (2000) to March 21 at 19h (1903) (all times UTC).
Individuals born during these dates, depending on which system of astrology they subscribe to, may be called Arians or Ariens. The planet which belongs to the area of Aries is Mars, named after the god of war.

People who were born in this section of the year have unusually strong will power and great obstinacy of purpose. They are usually born to be fighters in every sense of the world: they have also the greatest ability as organizers on a large scale. They find themselves as the organizers of big schemes or as the heads of big businesses, and also in the organization and development of countries.
These people are usually independent in everything they do. It is really important for them to do everything in their own way, and if they are intervene with other people they generally loose the shapes of the main purpose, step back and let the other person take their place.
As a rule they are unhappy in their domestic life. It is very difficult for such people to meet a member of the opposite sex who would understand them, and if opposition does not upset them from this point it usually does through their children.
Yet these people, be they men or women, deeply, fervently and strongly desire for affection and sympathy, more than anything else, and this is generally the rock on which they are finally wrecked if they have not the good fortune to meet their right affinities.
As far as material success or power is concerned, there are no heights to which persons born in this sign wouldn’t be able to. Success, however, is not making them feel really happy and satisfied.
They are inclined to lack caution, being by nature impulsive and quick in thought and action.
They are enormously ambitious, as a rule they succeed in life and gain money and position.
The lower type of this sign will stick at nothing to accomplish their purpose. The higher type are good masters, but at the same time severe in discipline and more or less unbending in everything they expect from other people. All representatives of this sign have a distinct desire to peer into the future, perhaps because they are impatient for things to develop. They are inclined to prophesy what will take place, and are often succeed in that.
As a general rule, the men born in this part of the year suffer a great deal through their affections; they seldom understand women, and make lots of serious mistakes in their relations with them.
For both sexes, they are happy only at moments when they are absolutely absorbed with their work and manage to overcome of obstacles.
All people and especially those who were born in this sign seldom get through life without receiving cuts, wounds, or blows to the head, either from accidents or violence.

Enough about Aries, I am on a role here, so I have to stop. Let's go do some haiku composing on Aries (The Ram). It will not be easy I think, but I have to do it of course, because it's my Zodiacal Sign.

in the meadow
newly born lambs frolic around -
the Ram watches

the Ram watches
to the deep blue night sky
his constellation

his constellation
drifting clockwards on the Zodiac
encounters Taurus

Hm ... not very strong I think, but I loved writing this (semi) cascading haiku series. I hope you all are inspired to write haiku on this first Zodiacal sign, I know it will not be easy ... but a challenge ...
Have fun, be inspired and share your haiku with our Carpe Diem community.