Here in The Netherlands finally Spring has come and the Cherry trees and all other blossoming trees and bushes have started to bloom. It's really a joy to see how the Sakura in my garden is in full bloom and I had to share another nice photo of the Sakura with you all. 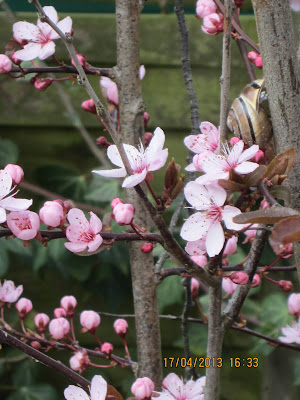 Back to our prompt for today. Today we share haiku on whisper (provided by Cathy of Haiku Plate Special) and I think it's a nice prompt to work with. I remember one of my first haiku ever with 'whisper' in it. At that time I wrote my haiku only in Dutch (my maiden language) and I couldn't have known than that I would start writing haiku in English to share them worldwide and on my own daily haiku meme Carpe Diem.

I love to share that 'first' haiku ever here with you.

I think this is a wonderful haiku. The Dutch version by the way is what call 'a counted verse' that follows the 5-7-5 syllables count as traditional in haiku. As I became better in writing haiku I choose to write my haiku in the so called Kanshicho-style, a style in which Basho wrote several yers. In that style the 5-7-5 syllables count isn't important. In my opinion the Kanshicho-style is closer to the Western way of writing haiku.

A few days ago I wrote a haiku in a comment on a post by Cathy and I posted it that same day on my home weblog, but I think I will share it here also. So another haiku on whisper

waves whisper
stories of far away places
to an old sailor

The whole post in which I shared this haiku you can find HERE.

I hope you did enjoy the read and that it inspires you to write your own haiku on whisper. I am looking forward to all of your posts. By the way (maybe you noticed it already) I have published our prompt-list for May 2013 and I have started a new feature called 'Carpe Diem's Treasure'.
Well have fun with this new episode of Carpe Diem.