We are on memory lane along the months of Carpe Diem Haiku Kai as a celebration of our second anniversary and I love to read those "old" episodes and I am glad to see that you all like it too.

Here is one of the haiku which I composed in response on "The Lighthouse of Alexandria":


stormy nights
entering the harbor save
led by the Lighthouse

And this was our anniversary logo back in October 2013: 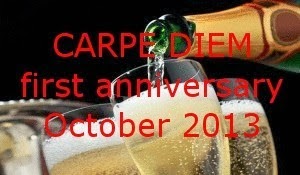 This first anniversary month we had wonderful haiku written by Garry Gay, our featured haiku poet that month, and I am happy to announce that Garry Gay will be our next Ghost Writer (October 22nd). Garry Gay was born in Glendale, California in 1951. He received a BPA degree from Brooks Institute of Photography in 1974 and has been a professional photographer since his graduation. He is skilled in all formats and has been creating digital images since 1993. His award winning Polaroid Transfers have hung in numerous juried art shows. He is a proud member of Advertising Photographers of America, Film Arts Foundation, Friends of Photography, Artrails, and the Cultural Arts Council of Sonoma County.
Greatly influenced by Basho's Narrow Road to the Deep North, he has steadily been writing haiku from 1975 to the present. He is one of the co-founders of the Haiku Poets of Northern California, serving as their first president from 1989-1990. In 1991 he was elected president of the Haiku Society of America.

This episode is open for your submissions tonight at 7.00 PM (CET) and will remain open until October 21st at noon (CET). I will try to post our next episode, river stones (November 2013), later on. For now ... have fun, be inspired and share your haiku with us all here at our Haiku Kai.