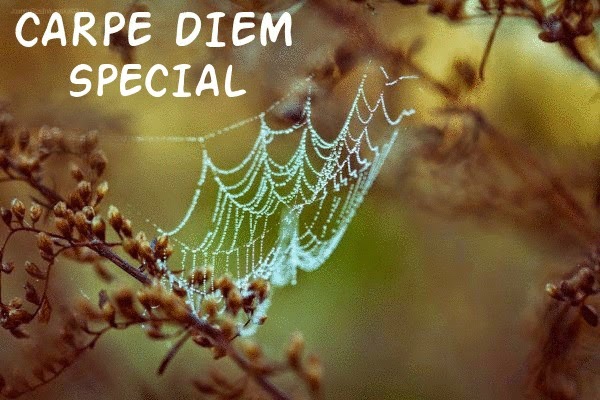 Last month our CD Specials were all quotes by Saint Francis of Assisi and this month we will go back to our regular way of CD Specials ... This month we have another wonderful featured classical haiku-poetess. She was a disciple of Basho and writes her haiku in almost the same style as Basho did. Her name Shiba Sonome (1664-1726) and this is the first haiku which I love to share here from her:

mushi no ne ya yo fukete shizumu ishi no naka

the insects' chirp
as night deepens
sinks into the stones

What a beauty don't you think so? It's a very fragile scene she describes here with this haiku and it so much in touch with a haiku by Basho in almost the same way. That haiku I love to share here too:

These haiku are very similar and they show how Shiba Sonome was influenced by Basho's way of composing haiku. Let me look at a haiku composed by Yozakura, whom also was a disciple of Basho and maybe he knew Sonome too.
semino uta mangetsuno hikarino nakade shimetta kirameku koishi

Here is my attempt to compose a haiku in the spirit of Sonome:

Hm ... I am not 100% satisfied with this one, but I have no idea how to catch the same feeling as in the haiku by Sonome ... or ... yeah I think this haiku is in touch with the spirit of Sonome.

This episode is open for your submissions tonight at 7.00 PM (CET) and will remain open until October 7th at noon (CET). I will publish our new episode, Blues (January 2013), later on today. For now ... have fun!