It's my pleasure to present to you our second article in response on a question by one of our haiku-family members written by Jane Reichhold. As I introduced this new feature Lolly wrote a question in her comment on that introduction. I have taken the freedom to email that question to Jane and here is her answer. It's a wonderful, educative, article. Thank you Jane for answering this question.

Dear Jane,
I have read your article on the “Phrase and Fragment Theory” but was wondering if you could give a shortened version of the commentary?
Lolly

Dear Lolly,
On that subject it is much easier for me to write a very long piece, because it is so important, and has so many examples to share, but I will try to be brief.
The most important aspect (for me) of identifying a haiku is to check if it has two parts called a fragment and a phrase. The fragment is that – a fragment of a sentence such as “first rain,” “in the garden” or so. Overused these become the boring bits of haiku. It is usually the shortest line in the poem and is either the first line or the last one.  It is the line that has often dropped the article (the, a or an) to be even shorter. The fragment often contains the reference to nature or places the haiku is somewhere in the universe but can be anything.
The phrase is composed of the next two lines that are grammatically linked and without dropped articles. Your phrase is where the verb (the action in the haiku) occurs. This is the real heart of your poem – your own idea or inspiration – the something that is new and different. If one part of your phrase is very short it is tempting to end the haiku right there and to make a third line out of the last word of it. Many people do. This is where counting syllables can be helpful to see if you could, should or may add another line with an additional idea. If your haiku has three parts, with a noun on each line, these are called “grocery lists” because they are, even at their best, just a list of similar things.
Recently I wrote:
first rain
the air thick with
memories
I am still wondering if I should put ‘memories’ up on the second line (where it sounds right) and add a new 3rd line. I am fussing with
first rain
the air thick with memories
of other lives
first rain
the air thick with memories
of lost friends
first rain
the air thick with memories
of the need to renew
and so my days go. I will keep all of these versions and hope the next rainy day will  bring another drop of inspiration.
From this you can see how the bottom two lines go together. If I took out the ‘of’ I would unlink the phrase so I am leaving it in to make a phrase. If you were reading this aloud you would have the longest intake of breath at the end of line 1 and a shorter one at the end of line 2 so your listeners could hear the break between the fragment and the phrase. I could go on giving many examples. . . but I promised  be brief!
This practice is so old in Japanese poetry that they themselves were not aware of what they were doing  so there is no Japanese names for these two parts. It was only as I studied Basho’s work that I noticed every one of his haiku had this break. He was doing it automatically because the breaks are already in the oldest waka, tanka and renga in Japanese and he was very used to hearing them. If you are reading translations you may not notice the breaks because translators were often not aware of them and simply smooch the lines together with more English words.
Now is a good time to flip back through the haiku you have written to see if you can find these two parts in your work. It could be that rewriting your haiku to show this facet will save an old haiku, to make it vital, and as good as it can be.
Jane

hot summerday
the shadow of the willows
Ah! that coolness

And this was the haiku by Basho which played the leading role in that article: 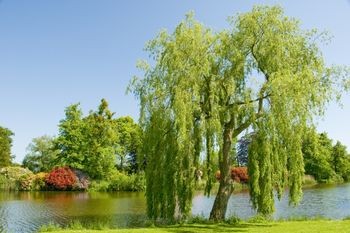 I have given it a thought reading it aloud and noticed that there were two moments to take a breath, after the first and second line. With the above article in mind and the idea that every haiku must be said in one breath ... I re-wrote the haiku to the next form:

Ah! that coolness
the willows' shadow
on a hot summerday

I don't really know if this re-done haiku has become revitalized, but I have to say this second version is better than the first version.

I hope you all did like this new episode of Carpe Diem "Ask Jane ..." and that it will give you maybe some new insights in your own way of writing haiku. Thank you Jane ...

Do you have questions about haiku, tanka or renga? Please share them with us and Jane will try to give you an answer on your question. You can email your question to our special email-address: