You all will certainly know the "frog"-haiku by Matsuo Basho, it's one of his most famous haiku.

the old pond:
a frog jumps in, -
the sound of the water

The pond is old, in an old garden. The trees are ages old, the trunks green with the moss that covers the stones. The very silence itself goes back beyond men and their noises. A frog jumps in. The whole garden, the whole universe contained in one single plop! - sound that is beyond sound and silence, and yet is the sound of the water of the old pond.
Well ... it's a told story, but this haiku by Basho is even known by non-haiku-poets.

And than there is that haiku by Sokan (1465-1553), a not so well known haiku poet from the 15th and 16th century, but he wrote wonderful haiku in my opinion.

placing his hands on the ground,
the frog respectfully recites
his poem

Unless one has seen the costume of the aristocracy of Old Japan, the full aptness of the comparison is lost. He is dressed in the Japanese style with his kamishimo, stiffly sticking out and exaggerating the shoulders. Bowing low from the squatting posture, he begins his recitation in a strangely frog-like, sepulchral voice. 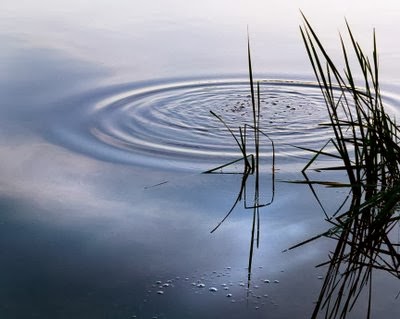 In the Kokinshu (10th century) we can read the following lines about frogs:

[...] "The nightingale that chants in the flowers, the frog that dwells in the water - are not both makers of poetry?" [...]

Sokan's poem is a kind of joke on the frog, but in addition, and what makes it poetry, it shows us something of the real frog, something of its essential nature.

And now it's up to you my dear Haijin, visitors and travelers, to write an all new haiku inspired on this episode of "Little Creatures". Have fun ...!

This episode is open for your submissions today at noon (CET) and will remain open until next Thursday October 9th at noon (CET).
By Chèvrefeuille - October 02, 2014